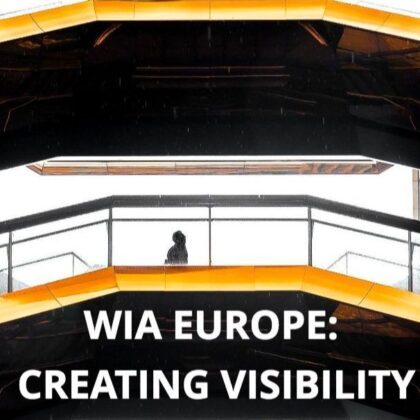 For a full decade now, WIA Europe has been dedicated to its stated goal of creating more visibility for women in the aerospace sector. It came therefore as a particularly delightful news that the 10th anniversary of the Association on 12 June coincided with NASA’s unveiling of the new street signs outside its Southwest D.C. headquarters, where the “Hidden Figures Way” can be found now. The street was renamed to honour the pioneering African-American female mathematicians Katherine Johnson, Dorothy Vaughan and Mary W. Jackson, who worked for NASA as “human computers” in the 1960s and „contributed to NASA’s mission despite adversity“.

Fortunately, they are not the only female experts who have been brought out of the shadow and given name and face in the public eye over the recent years. NASA’s Apollo missions, which for a long time maintained the medial image of an all-male achievement, are now populated with rare but prominent female contributors like Frances Northcutt, the first female engineer to work in the Mission Control Center, or Margaret Hamilton, whose on-board flight software was crucial to the Apollo programmes and beyond. These women remain inspiring figures because they were not only successfully mastering technical challenges in their professional field, but were doing so while facing gender expectations, incidentally redefining the limits of what women can do. Having such visible role models is a crucial factor, which decisively contributes to strengthening the self-confidence of girls and young women as an equal and important partner within any scientific or engineering team taking the humankind to new frontiers.

Equally important as introducing pioneering icons, however, is to move quickly past their merely symbolic status. Remembering the first female flight into space in 1963, Valentina Ponomaryova, one of the five members of the first Soviet female cosmonaut corps, sadly pointed out that while Tereshkova’s record-breaking flight was officially popularised as an exemplary achievement representing the far-reaching possibilities of hundreds of millions of Soviet women, in reality they all stayed where they traditionally belonged: at their pots, pans and desks. And while the situation is visibly changing today, still too many girls are held back by discrimination, biases, social norms and expectations in their educational and professional choices.

Indeed, even though today an increasing number of girls and women choose to enter STEM disciplines, they are also leaving this field in noticeably disproportionate numbers during their higher education, in their early professional years and even later in their career cycle. It is necessary to understand the variety of reasons for this in order to create responses that would engage girls and women at every level of their professional development, and to bring about permanent structural changes.

Self-selection bias, according to the UNESCO report on girls’ and women’s education in STEM from 2017, is a major reason for girls opting out of STEM fields, and persisting gender stereotypes are an inherent part of the problem. Even with prominent role models in sight, girls still grow up explicitly and implicitly exposed to the idea that STEM studies and careers are specifically “male” domains, even though they are increasingly open to women. As a result, girls would automatically self-censor themselves out of pursuing a “non-female” profession.

The development of gender bias within a professional field can be prominently observed in the history of the modern computer science. The involvement of women in software development has most recently drawn a lot of attention, making women once more visible where they have been excluded from public recognition before. In the 1960s, advertised as a perfect alternative to such typically “female” jobs as secretary, librarian or nurse, computer coding quickly became a “girl’s job”, hailing women as “naturals” in programming because of their patience and ability to handle detail. While the abilities of women have not changed since, and there is no research that shows any significant influence of biological factors on the innate abilities of women and men to equally succeed in technical jobs, we nevertheless have experienced a gender shift in the field of computer programming. Based on psychological personality profiling that primarily focused on men, a personality test was developed that began to target a persona that we know today as the stereotypical “male computer nerd”, slowly but surely profiling women out of this technical profession.

Increasing visibility must therefore not be limited to showcase models and token celebrities. For WIA Europe it means creating a sense of normality for women in technical fields, mirrored in both, outstanding role models as well as high numbers of women represented in universities, engineering labs, expert panels and leadership positions in the aerospace field.

“Women are excellent leaders and managers and we should invest in their career development from the very early stages,” says Scott Millican, CEO of HE Space and former NASA engineer. Having seen women steadily entering engineering and space careers since the 1970s, he is convinced that the necessary mind shift has already been made. True to this conviction, HE Space, specialised in personnel recruitment for the space sector, demonstrates a stable equilibrium between female and male experts. “In our database women are strongly represented, but when choosing the right candidate we are looking at the candidate’s qualifications, not their gender,” says Mr. Millican.

To promote this development across the aerospace sector, WIA-E is regularly organising a variety of activities, among others the recently held Unconscious Bias Workshop and Webinars, in order to foster understanding and elimination of stereotypical gender profiling. The ultimate goal being to help professionals to grow, learn, and develop their highest potential without the constant background noise of gender politics. If this veil of prejudice will be eliminated, many more girls and women will continue this path and consequently not just a symbolic, but their true visibility will be achieved.