Women in Aerospace Europe was present at this year’s Toulouse Space Show held from 25th to 28th June 2012. On the evening of the 26th of June, WIA-E held its first network meeting in France to which all TSS participants were invited.

Board member Lesley Jane Smith explained the background and goals of WIA-E to a mixed audience of about 40 people. Two further members of the panel, Claude Dubreuil (Head Legal Counsel, Astrium) took the floor, talking about the importance of women’s presence at all levels of business and why promoting women’s careers was a necessity not only for her own company, but for society in general. The third panel member, Dr. Kai-Uwe Schrogl, Head of ESA Policies Department, European Space Agency, and one of the founding members of WIA-E added equally convincing arguments in support of the WIA-E network. Quite a few questions and interest then followed from the floor.

The meeting was followed by an excellent reception kindly sponsored by both EADS Astrium and ESA.

WIA-E is delighted to report that the event attracted great interest amongst the French space community and other participants to the Toulouse Space Show. Discussions are now underway as to how the French branch of WIA-E should be established. 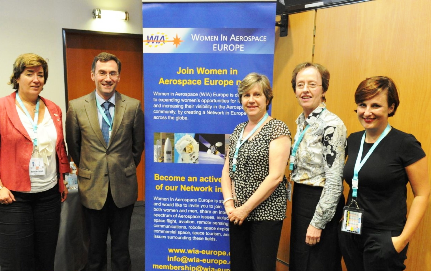