UNOOSA, the United Arab Emirates (UAE) Agency and the Mohammed Bin Rashid Space Centre, were great supporters of the WIA-E sponsored breakfast event, held in Dubai on 21 November 2016 with the following speakers:

This first High Level Forum in Dubai forms one of the milestones on the way to develop a UNISPACE+50 declaration in 2018 in Vienna, two further High Level Fora are expected on the way towards 2018. This year marks at the same time the anniversary of the UNISPACE I Conference as the first worldwide conference in the UN frame dealing with Space in 1968.

More than 40 participants – be it male or female – followed the speeches and had afterwards very lively discussions. Simonetta Di Pippo previewed a UNOOSA project called “Space for Women”aimed at showing how space-based technology can contribute towards achieving gender equality, one of the UN Sustainable Development Goals (SDGs).
Sumaya Al Hajeri shared a quote from her Prime Minister who said the country has moved from the phase of empowering women to empowering society through women. She said that the national space programme wants to attract more women, who account for more than 37 per cent of employees.
Khuloud Al Harmoodi spoke of her journey from university student to landing a job with the Mohammed Bin Rashid Space Centre and highlighted some of the challenges to improving the numbers of women in STEM subjects.
Gale Allen, in her capacity as Deputy Chief Scientist of NASA illustrated a snapshot of women’s involvement in the US aerospace industry and said studies show that traditional methods of teaching the STEM subjects (science, technology, engineering and mathematics) do not take into consideration how women learn. For example, when studying calculus, they prefer to understand how it can be applied as opposed to just doing calculations. Changing the way science and mathematics are taught could help increase the number of women employed in the aerospace industry.
Dominique Tilmans as new president of EURISY brought news from Europe. She reported that although many women are enrolled in university, they are not pursuing the sciences and suggested that perhaps promoting the job opportunities the industry offers could increase women’s participation in the sector.
The audience was interested in the statistics and comparisons of achievements with respect to women´s career building in the different regions and organizations in the space arena.

The dedicated event is part of the Dubai Declaration which emphasizes the need for an intensified involvement not only of youth in Science, Technology, Engineering and Math (STEM) education but also an increased participation of women in space activities.

Below some photos of the event: 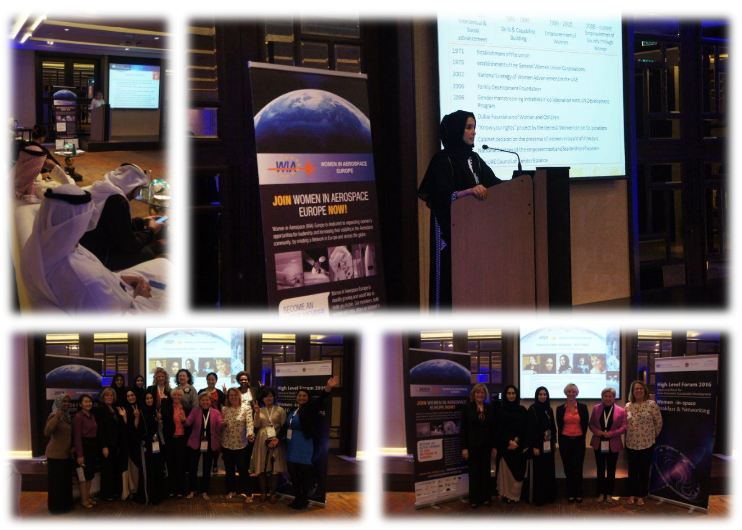