On the 29 th of May, WIA Rome organized the “Space Debris Conference” in the “Sala degli Affreschi” room, at the Engineering Faculty of La Sapienza, University of Rome.

This was the first of the several events planned for the 2017 activity plan of the WIA Rome local chapter and presented during the last meeting in March 2017 (picture below). 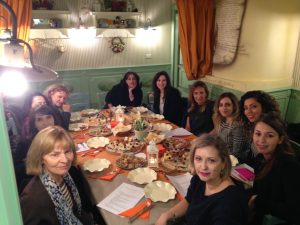 The main goal of this conference was to offer to the audience a complete overview about Space Debris, from the scientific to the legal aspect. To this purpose, both representatives from the academia, Italian companies and the both Italian and European Space Agency were invited to share their experience and activities in the field.
The conference started with a brief welcome by Annamaria Nassisi, the WIA Director of Communication and the local group co-leader (picture below). 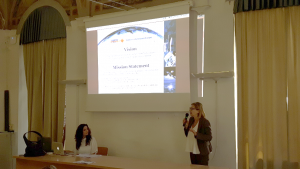 Prof. Patrick Seitzer, from the Astronomy Department of the University of Michigan, gave the first talk related to the scientific aspect of the space debris field, by describing the activity carried out in the US, from the establishment of their first observatory, MODEST (Michigan Orbital DEbris Survey Telescope). During his presentation, titled “Space Debris at Geosynchronous Orbit – Studies using Optical Telescopes”, he outlined the current Space Debris scenario and explained the available techniques to perform a complete monitoring and detection, especially by means of optical telescopes for satellites and non-cooperative objects in the geostationary ring (picture below). 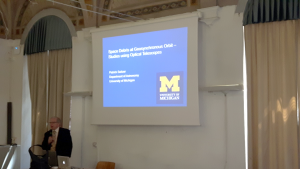 Then, Prof.Fabrizio Piergentili took the floor and introduced the past and on-going activity at Sapienza – University of Rome in order to guide the audience in the path followed in last years at academic level in Italy, from the first Italian space debris observatory (SPADE). In particular, he tried to clarify how the current techniques based on photometry came about for the space debris characterization and the possible methods to perform a complete space survey able to ensure an acceptable accuracy with very affordable cost (picture below). 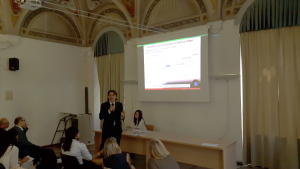 To conclude the scientific and university experience in the space debris field, three students from Sapienza – University of Rome were invited to describe the LEDSAT (LED-based small SATellite) project, just selected by ESA for the first phase of the second edition of the Fly Your Satellite! Programme. This 1U CubeSat will be launched within two years from the International Space Agency (ISS) thanks to the ESA support. Moreover, it will allow the Sapienza’s research team to perform several investigations about tracking and attitude reconstruction methods based on the observation of the on-board a payload, composed by LEDs (Light Emitting Diodes) in three different colours able to blink with different frequencies (picture below). 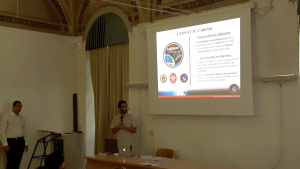 Roberto Lupo (picture below), from Telespazio, was the first speaker from the industrial sector. He presented “Space Debris: Applications and Operative services “The Red Line” traced by Telespazio”. After an in-depth description of the threat caused by the current increasing of debris in the space environment, he explained the ESA Space Surveillance and Tracking (SST) methodology and the Telespazio involvement and activities into this domain. In particular, he explained their contribution for the design, implementation and maintenance of the SST national segment with their “Red thin Line”. 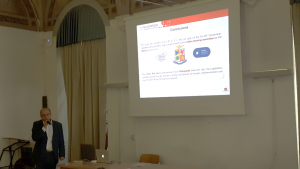 Simona Ferraris (Figure below), responsible of Space Tug & Exploration Building Blocks belonging to Advanced Exploration Programs in Thales Alenia Space (TAS), gave a speech titled “Active Debris Removal: implications on a Space Tug concept”. She put emphasis on the on-going programs for removing the debris orbiting around the Earth to mitigate the possible risk of collisions between them and active satellites. Starting from the possible strategies for the ESA e. Deorbit Mission with the considered capture methods and tools, she tried to explain the involvement of her TAS Italy into this Deorbit study, highlighting the defined scenarios and the Space Tug they are working on, also in the framework if the SAPERE/STRONG is a R&D research program. 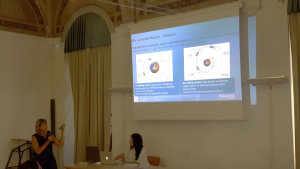 Roberta Pellegrino (Figure below), from OHB Italia, described their work related to the “SST Fly Eye Debris Asset” and the activities performed by her company in collaboration with ESA related to the space debris field. In particular, she introduced the SARA ESA study to define the feasibility of a system for the survey of space debris based on the combination of UHF radar and optical telescopes for the (Space Situation Awareness) SSA program and the main achieved results. Moreover, she described also the Fly-Eye Telescope developed by OHB Italy for observing and predicting the orbit of space debris. 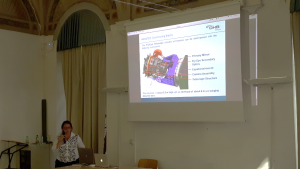 Ettore Perozzi (Figure below), from the ESA SSA-NEO (Near-Earth objects) Coordination Centre, introduced the on-going activity related to “Space Debris and NEO: the case for WT1190F and Exomars”. In particular, his speech was focused on their methods for discovering the current and future position of asteroids or comets relative to our planet in order to estimate the likelihood of Earth impacts and to have the chance of estimating possible impacts and deflection methods. 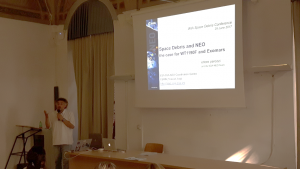 Filippo Gemma (Figure below), from MBA GMSPAZIO srl, was the last representative from the Industry and he illustrated the activity of his company in terms of “Ground for space debris monitoring”. In particular, he explained the tools developed by his company for the prediction of possible impacts between an orbiting object and a debris and their future projects in the field. 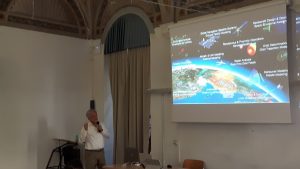 As last speech, Annamaria Nassisi, Manager Strategic Marketing OEN in TAS, with Maria Messina, from the Italian Space Agency, introduced the Space Debris legal aspect. They described their work titled “Need of an international policy and a regular framework for operational debris mitigation systems”, already presented at the 2016 International Astronautical Congress (IAC) in Mexico last September. The main tasks were particularly focused on the proposed methods for preserving the space environment from threats, such as debris, and the need of an in-deplth analysis of the policy & legal issues for setting specific rules at international and national level for mitigating all the related risks (Figure below). 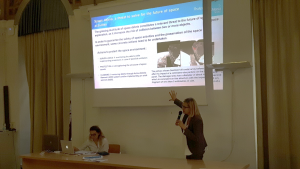 At the end, Cristina Valente, from Telespazio and WIA local group leader, concluded the Conference  and acknowledged the presenters, the organizers and the audience for attending the event.