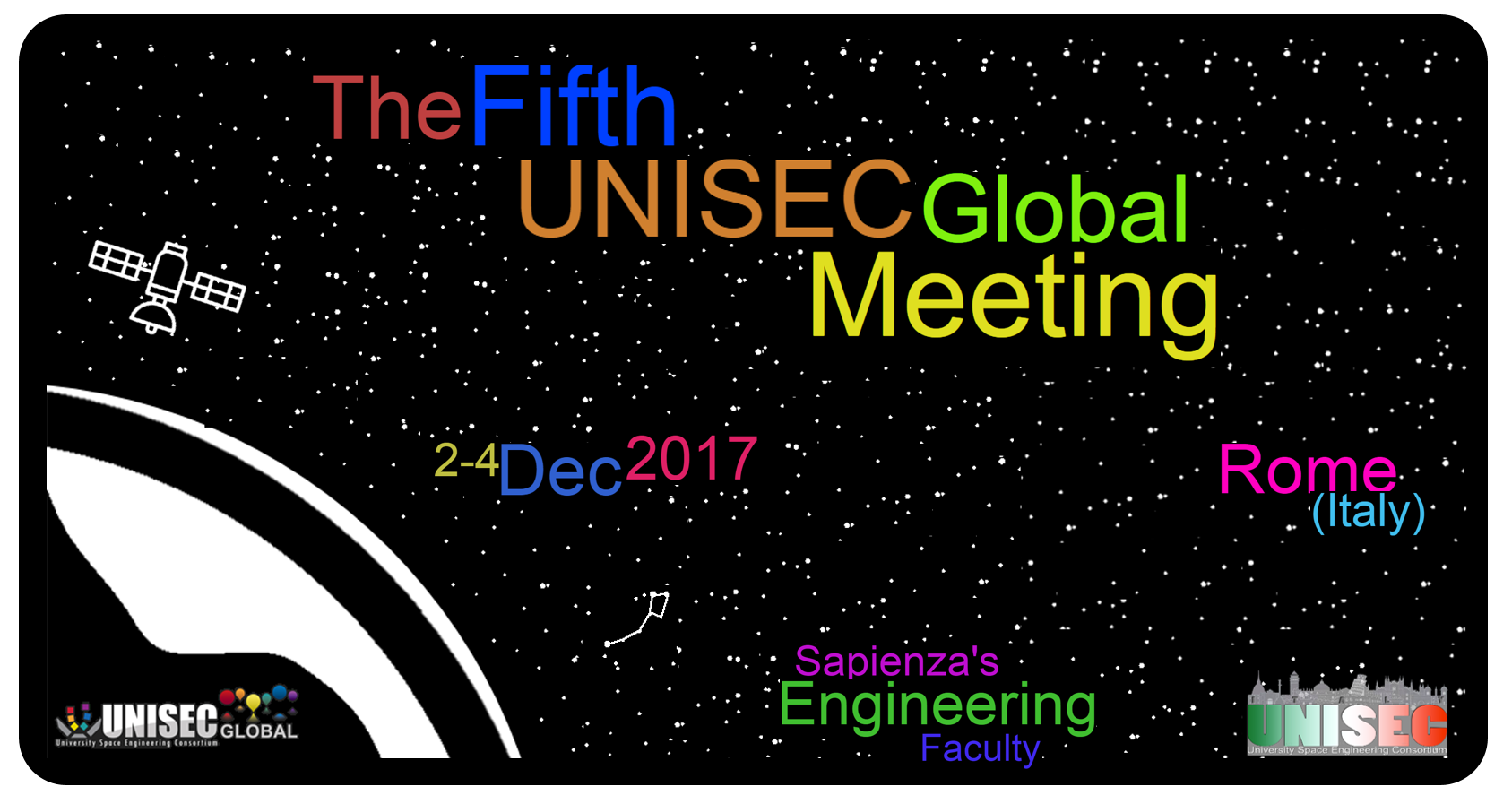 From the 2nd to the 4th of December, WIA-Europe was invited take part at the Exhibition organized in the framework of the 5th UNISEC Global Meeting (http://www.unisec-global.org/meeting5.html) at the Engineering Faculty Sapienza – University of Rome, hosted by the DIAEE (Dipartimento di Ingegneria Astronautica Elettrica ed Energetica) and UNISEC (UNIversity Space Engineering Consortium) Global, an international no-profit association involving universities and companies across the world active in the space field. The organization aims at creating a world where space science and technology can offer opportunities to both individuals and institutions in every country for peaceful purposes and for the benefit of humanity. In the figure below is reported the conference official banner.

This event is part of the activities plan established by WIA Rome Local Chapter in 2017. The conference main objectives included enhancing the collaboration among academic entities and industries and promoting university students participation in international projects. In this regard, UNISEC every year organizes two competitions open to students from all over the world. The Mission Idea Contest (MIC) concerns innovative design of small satellite missions, ranging from improved Earth observation capacities to brand-new space agriculture concept. To participate in the second challenge, the De-orbit Mitigation Competition (DMC), an original solution to face the satellite deorbiting phase needs to be proposed.
The meeting developed in a three-day session. The first day, before the conference beginning, the local group prepared the exhibition booth reserved to WIA-E (figure below). 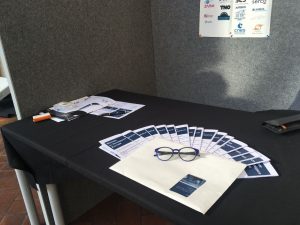 The Opening Ceremony officially started with the welcome speech from Simonetta Di Pippo (figure below), founder of WIA-Europe and Director of UNOOSA (United Nations Office for Outer Space Affairs). 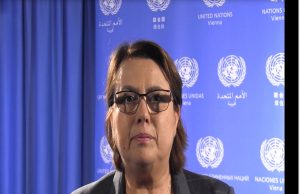 Then, the Welcome Speech was made by Professor Maria Sabrina Sarto, Director of DIAEE and Deputy Rector for Research Tools and Infrastructure at Sapienza – University of Rome (figure below). 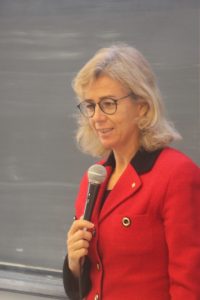 During the Local Chapter Reports session, representatives from different countries illustrated the activities carried on in the framework of UNISEC. Particular attention was paid to students involvement in CubeSat- related project and hands-on experiences. In the picture below, the coordinator of UNISEC Italy prof. Fabio Santoni from DIAEE- Sapienza is giving an overview of the projects developed by university students by remarking the significant cooperation with WIA-Europe network to sustain young female engineers (figure below). 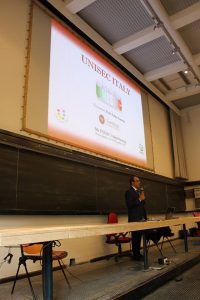 After the coffee break, the invited exhibitors presented their organizations and companies. Annamaria Nassisi, the WIA Director of Communication and the local group co-leader, introduced WIA-Europe and the organization activities. In particular, she focused on describing the association structure and history, the network mission and the local groups distribution. The opportunities for grants and awards were introduced to encourage young talents to apply. She listed the corporate members and partners and concluded explaining the advantages in subscribing to WIA-Europe (figure below). 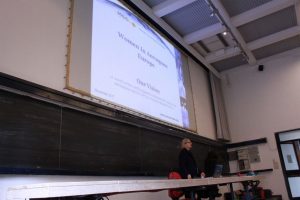 During the breaks, the participants of the meeting visited the exhibitors dedicated area. The local group distributed flyers and spread the word about WIA-Europe with the interested people asking for information (figure below). 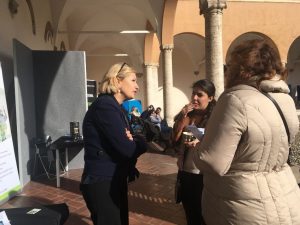 The WIA Rome Local Group was very glad to perceive a great enthusiasm about the topic. The members of the exhibition booth shared their opinions and passion about space-related subjects and laid the foundations for fruitful future collaborations (figure below). 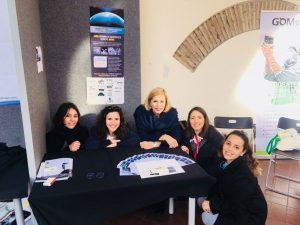 The first day program continued with the Preliminary Workshop for the 5th Mission Idea Contest (Pre-MIC 5). Several new ideas concerning small satellites were discussed by students in front of a panel of experts.  At the end of the day, the winners were announced. The first place went to “SIESTA satellite”, a mission to explore the ionosphere at several times and altitudes by using a small satellite. The project is conducted by a consortium of universities from USA, Taiwan and India. The second place was assigned to “MICRO-TOM”, an Italian project developed by ENEA in cooperation with Sapienza – University of Rome. The mission aims at investigating the possibility to let a specifically space-designed tomato plant grow inside a 12U CubeSat platform. 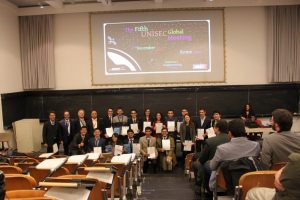 The second day opened with the Student Presentations: the UNISON (UNIsec Student OrganizatioN) points of contact presented their efforts to manage activities of UNISEC association in each country. In the second part of the conference, seven groups of discussion were formed to talk about seven different interesting topics in the space sector. The participants subscribed to a group according to their personal interest and shared their thoughts with the others in a brainstorming session. Then, group moderators prepared a final presentation and illustrated the comments and results achieved during the discussion time. To record the event, a group photo of both exhibitors and attendees has been taken and shared in the social media pages (figure below). 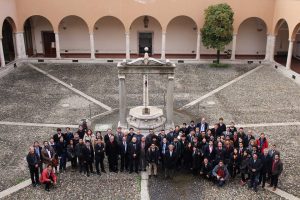 During the last conference day, the Debris Mitigation Competition (DMC) was held. Teams from different countries presented their innovative mission ideas intended to cope with the problem of space debris generation. The first place was assigned to the project named “Membrane Deployment De-orbit Device Composed of Self-Deployable Truss Structure” proposed by the Nihon University from Japan. The second place went to the “Water Deorbiting Device” project exposed by a student from the Moscow State University, Russia. The DMC award ceremony is shown in the figure below. 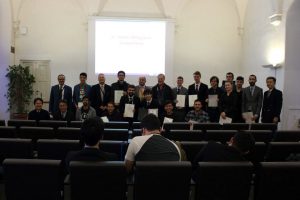 To conclude the event day, a Student Session to give an “Overview of International Hands-on Educational Activities for Students in the space field” was organized by UNISON students referring to universities from several countries (as Bulgaria, Italy and Japan). Each presenter gave an overview on the prospective educational programs offered by academic institutions and space agencies across the world. The aim was to persuade students to participate in hands-on projects development, in order to increase their experience in end-to-end space-related experiments (figure below).

The closing ceremony determined the conclusion of the conference. Members from the UNISEC-Global organization took this opportunity to publicly thank the host organization, in particular the Italian Point of Contact prof. Fabio Santoni and the Student Representative of UNISON Italy Ms. Alice Pellegrino, as well as the students and collaborators who contributed to the successfully setting up of the event.