AMSTERDAM, 20 May 2020. – Women in Aerospace Europe (WIA-E) announces Dr. Pascale Ehrenfreund as the winner of the Outstanding Achievement Award 2020. 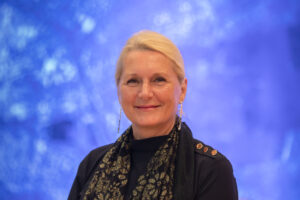 The annual WIA-E Outstanding Achievement Award acknowledges exceptional technical or scientific achievements and dedication to the advancement of women in the aerospace field.

This year, WIA-E is honoured to present the Austrian astrophysicist Dr. Pascale Ehrenfreund with the Award and an Honorary Membership, recognising her ongoing dedication to gender diversity and her strong presence as a role model to her peers in this area.

“We are proud to have Pascale Ehrenfreund as a long-standing member of Women in Aerospace Europe, which celebrated its 10th anniversary last year,” says Luisella Giulicchi, President of the association. “As one of the few female heads of a space agency, Dr Ehrenfreund has been a great supporter of our cause. Her exemplary scientific career as well as her recognised leadership skills make her a unique and inspiring role model for every young woman aspiring to pursue a career in the aerospace sector. We are delighted to honour this exceptional woman.”

Pascale Ehrenfreund has been Chair of the German Aerospace Center (DLR) Executive Board since 2015, and since 2019 President of the International Astronautical Federation (IAF). Born in 1960, Ehrenfreund obtained degrees in Astronomy and Biology at the University of Vienna, where she also earned her doctorate in 1990. Ehrenfreund was appointed as a Fellow of the European Space Agency (ESA) at the Leiden Observatory in the Netherlands, upon completion of her doctoral studies.

Between 2001 and 2005, Ehrenfreund held a professorship in Astrobiology at the University of Amsterdam and the University of Leiden, where she remains a Visiting Professor today. In addition, between 2005 and 2008 she was a Distinguished Visiting Scientist at the Jet Propulsion Laboratory in Pasadena, USA, which is part of the California Institute of Technology.

Ehrenfreund obtained a Master of Arts in Management and Leadership in 2008. Since then, she has been Professor of Space Policy and International Affairs at the Elliott School of International Affairs, George Washington University, and Lead Investigator at the NASA Astrobiology Institute.

She accepted the honorary position of President of the Austrian Science Fund (FWF) in 2013, from which she stepped down upon her appointment at DLR. Ehrenfreund is married with two children.

Due to the COVID-19 restrictions, the Award Ceremony will be scheduled at a later date this year. Previous awardees include among others former astronaut Claudie Haigneré (2017) and Chief technology officer of Airbus Grazia Vittadini (2019).

Women in Aerospace Europe (WIA-E) is an international network devoted to expanding women’s opportunities for leadership and increasing their visibility in the aerospace community in European countries and beyond. The association welcomes diverse talent, male and female alike, that is key to the growth of a modern and dynamic aerospace sector all over the world. With a variety of activities, among others its Grants and Awards programme, WIA Europe would like to encourage and support upcoming talent as well as honour senior women for their outstanding achievements.