WIA-E Barcelona invite to “GAIA: Revealing the history of the Milky Way by measuring 2 billion stars” by Carme Jordi 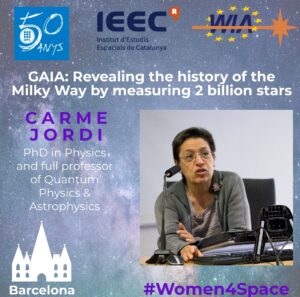 The Gaia space mission is the current flagship of the European Space Agency. The goal of the mission is to unveil the history of the formation and evolution of the Milky Way, the galaxy where we live. To do that, Gaia measures positions, motions, distances and physical properties of about 2 billion stars. After more than six years of nominal operations the satellite has collected more than 1.5 trillion measurements. The two data releases up to now have unveiled a rich substructure in terms of positions and motions and a complex past history of mergers with other galaxies that trigger episodes of star formation.

On November 26 at 7 pm, Carme Jordi will explain this Gaia project and her personal and professional experiences of her career on the first day of the Women4Space conference series. Carme has a PhD in Physics from the University of Barcelona, is a Professor in the Department of Quantum Physics, Astrophysics at the same university, member of the Institute of Cosmos Science and the Institute of the Space Studies of Catalonia and a source of inspiration for both men and women.

Register at here and don’t miss it! 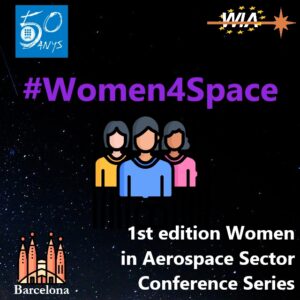