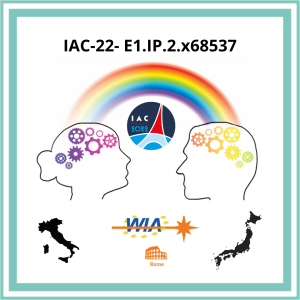 As part of the IAF SPACE EDUCATION AND OUTREACH SYMPOSIUM, WIA-Europe Rome will present their paper Person perception on gender-related inequalities in the Italian and Japanese Aerospace Sectors. The paper discusses the methods and results of a survey on the perception of gender-based issues in Italy and Japan, two countries with currently the highest and third-largest gender gaps among industrialized economies, respectively.

The United Nations 2030 Agenda for Sustainable Development Goals (SDGs) was drawn up to provide a global framework for advancing sustainable development over the next decade. In this context, women have a critical role to play, with Goal 5 as the stand-alone goal to globally achieve women’s equality and empowerment. Despite the significant progress made to grant women access to science, technology, engineering and math (STEM), statistics do not show a significant improvement in these fields. Indeed, women still represent only 28In such a widespread scenario, this study relied on data collected via an anonymous questionnaire between 2020 and 2021, to find out the key correlations between respondents’ beliefs that their gender constitutes an obstacle, and the degree of gender disparity they observe in their aerospace professional or academic field. The preliminary results of this work were presented during IAC 2020, but a more in depth investigation was necessary to identify the role of cultural influence on respondents’ replies. Consequently, the survey was improved and reshared in 2021 in order to collect more significant data. For the survey’s scope, focusing on just one cultural background was not sufficient to provide a comprehensive understanding of the issue. Consequently ,to broaden the generality of this study, two different cultures with similar gender inequality situations, namely Italy and Japan, were explored and confronted. The reasons for the countries’ choice lies in the fact that Italy and Japan currently have the highest and third-largest gender gaps among industrialized economies, respectively. Moreover, they are the two G7 countries with the lower 2021 Global Gender Gap Index. In this work, the study’s conceptual framework and methods behind the shared survey are described in depth. The survey’s improvements are highlighted, focussing on how this tool can be tailored when looking for cultural impact on perception. Moreover, the findings are contextualized in light of cultural aspects and participant characteristics (gender and nationality). Finally, the findings give insights and suggestions for improving perceptions of gender-based issues in the Italian and Japanese aerospace sectors.