The formation of WIA-Europe, WIA’s first sister organisation, was announced at the Le Bourget Paris Air Show on Monday June 15, 2009, at the European Space Agency (ESA) in Paris, France.

The formal announcement ceremony was held in the European Space Agency (ESA) Pavilion. Jean-Jacques Dordain, ESA’s Director General officially announced the creation of WIA-Europe. Former NASA Administrator Mike Griffin and his wife, Rebecca (a former WIA board member), emphasised the importance of WIA and its mission to the aerospace community. WIA President-Elect Daryle Lademan welcomed WIA-Europe, and shared the American association’s origins and over 20-year history. WIA-Europe’s President, Simonetta di Pippo, and the board Chair, Claudia Kessler, described their vision and hopes for WIA Europe.

For more than 20 years in the USA, Women in Aerospace (WIA) has been dedicated to expanding womens’s opportunities for leadership and increasing their visibility in the aerospace community The goal is to expand this network to a global organisation. The first step has been undertaken by founding WIA Europe. 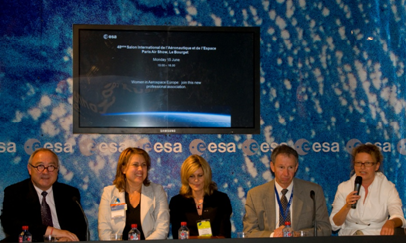