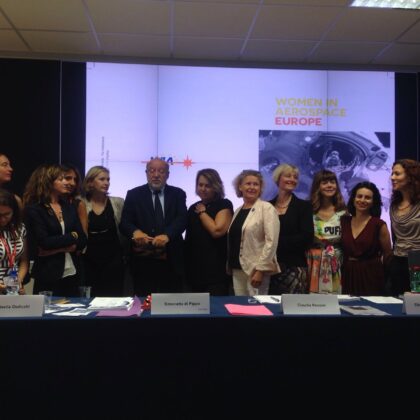 On 24 June 2016, the WIA-Europe Board of Directors met for their regular Board meeting followed by the annual WIA-Europe General Assembly in Rome hosted by Thales Alenia Space.
During the General Assembly, it was announced the appointment of Claudia Kessler as the new President of WIA-E, while Simonetta Di Pippo, the historical founder of the European aerospace organization, was made Honorary President.
Furthermore, Luisella Giulicchi was presented as the new Chair of the WIA-Europe Board of Directors and Barbara Imhof will be taking over the Treasurer position, Christiane Lechtenboerger from DLR was elected as Director of International and Institutional Relations and Annamaria Nassisi from Thales Alenia Space was elected as Director of Communication.
The General Assembly Meeting was well attended including representatives of the most WIA-Europe’s distinguished corporate member organisations, such as Thales Alenia Space, Airbus Defense & Space, ITU,  ESA, ASI, DLR and other industries/research centers like Telespazio and INAF.

For more information on the board members please have a look at the website:
https://wia-europe.org/about-us/boards-offices/