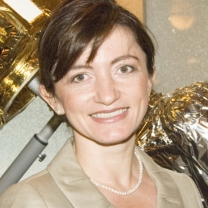 After spending three years as Research Fellow at CERN (European Laboratory for Particle Physics) in Geneva, she joined ESA (European Space Agency) where  she has been working since twenty years. At ESA, in the earlier phases of her career, she contributed to Research and Development activities related to the Attitude and Orbit Control technologies and the use of GPS for aerospace applications. For the last fifteen years, she has held several technical and programmatic management positions in spacecraft project development, from feasibility study to implementation phase, for both for the ESA Science Programme and the ESA Earth Observation Programme: i.e. Bepi Colombo, Lisa Pathfinder, Sentinel-1, Sentinel-6/ Jason-CS.

Luisella has authored many scientific and technical papers and has been associate editor for several publications and scientific journals. In addition, throughout her career Luisella has actively participated in several professional organizations: American Institute of Aeronautics and Astronautics (AIAA), International Federation of Automatic Controls (IFAC), American Astronautical Society (AAS); Council of European Aerospace Societies (CEAS).

She is Associate Fellow of the AIAA, she is currently also serving in the AIAA Board of Trustees.

531 / 715
We use cookies to ensure that we give you the best experience on our website. If you continue to use this site we will assume that you are happy with it.OkPrivacy policy