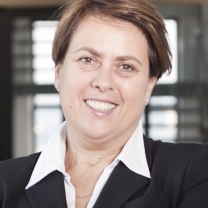 Simonetta Di Pippo founded WIA-E as a non profit association together with Claudia Kessler in June 2009.

Simonetta holds a Master’s degree in Astrophysics and Space Physics at the University “La Sapienza” in Rome, Italy (1984) she then went on to join the Italian Space Agency (ASI) in 1986. Her responsibilities range from Earth Observation to Automation & Robotics, Science and Human Spaceflight, she took up duty as Director of the Observation of the Universe in 2002.

After having served as Director of Human Spaceflight at the European Space Agency (ESA) from 2008 to 2011, she returned to ASI leading the European Space Policy Observatory at ASI, Brussels until March 2014, she then started serving as the Director of the Office for Outer Space Affairs at the United Nations, Vienna.

She co-founded Women in Aerospace Europe (WIA-E) in 2009, leading the association in her capacity of President until 2016. WIA Europe has established its legal base in the Netherlands with its main aim is to expand the representation and leadership of women in the aerospace sector. In 2017, she became a UN International Gender Champion, demonstrating her dedication and leadership to strengthen global gender balance. In 2006 Simonetta was knighted by the President of the Italian Republic, this was followed (2008) by the International Astronomical Union (IAU) assigning the name “dipippo” to asteroid 21887, in recognition of her efforts in space exploration.

She is author of more than 70 publications, 2 books, more than 1000 articles and interviews on magazines and newspapers, member and President of scientific committees of international congresses, member and President of scientific awards’ jury, she has been teaching at various Universities, including the George Washington University (USA), New York University in Abu Dhabi and the LUISS-Business School in Rome. From Nov. 1st, 2013 she is a visiting scholar at CalPoly, California since Nov. 2013. In 2018, she was the first woman ever to receive the Eurisy’s Hubert Curien award.

In May 2013 she received an Honoris Causa Degree in Environmental Studies from the St. John University in Vinovo (TO) and in 2017 an Honoris Causa Degree as Doctor in International Relations from the John Cabot University in Rome. She became a member of the Global Board Ready Women (2013), which is a list of top managers created by European Business Schools in the framework of the Women on Board initiative. From 2016 onwards, she has been member of the World Economic Forum Global Future Council on Space Technologies. She is considered one of the most highly regarded worldwide leaders in international cooperation in the aerospace sector.