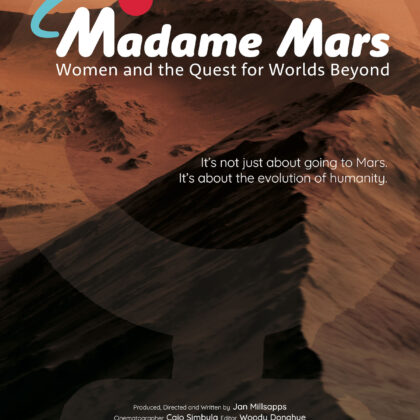 WIA-E UK invites to movie screening “Madame Mars: Women and the Quest for Worlds Beyond”

WIA-E UK local group has secured 20 free tickets for a screening of Madame Mars in Cambridge. Full details below. To attend please email wiaeurope.uk@gmail.com with the subject Madam Mars Film. This event is open to all but priority will go to WIA-E members.

The Institute of Astronomy invites you to a screening of the documentary-style movie Madame Mars: Women and the Quest for Worlds Beyond http://madamemarsfilm.com/ by Jan Millsapps.

The discussion will also include a short reading from Jan’s novel “Venus on Mars” and Q&A.

Madame Mars reframes the story of space exploration as a feminist issue, connecting the original space age that denied opportunities to women, to current Mars initiatives that still lack a full commitment to diversity, and argues for a more inclusive spacefaring future. It uses documentary storytelling, global online outreach and interactive participation to tap into public enthusiasm over proposed human missions to the red planet and highlights past accomplishments and future opportunities for women in the aerospace arena. The film has won multiple awards and has been screened at the United Nations in Vienna, at the Arecibo Observatory in Puerto Rico and at the New York Academy of Sciences Global STEM Summit.

You can watch the trailer here.

Jan Millsapps, Ph.D., is a veteran filmmaker, a pioneering figure in the new media movement and an accomplished writer.
She has produced films, videos, digital and interactive cinema on subjects ranging from domestic violence to global terrorism, and has written two space-themed novels: Screwed Pooch (2007) and Venus on Mars (2015).

Jan’s unrealised – yet powerful – dream of becoming an astronaut was featured in the story Catching up With a Girl Left Behind on Scheherazade Speaks Science.

Ghina was the first person to obtain a PhD in astrophysics from a Lebanese institution, the American University of Beirut, where she worked as a lecturer before moving to Cambridge. She is the founder and managing editor of She Speaks Science, an award-winning science storytelling platform that makes science accessible and promotes women in STEM.

Dr Chiara Palla is working as Space instrument engineer on RadCube and Lagrange mission with the Magnetometer Lab of the Space Physics group at Imperial College London. She holds a PhD from Cranfield University (2017) specialising in Space Debris Mitigation technologies for de-orbiting. Her background is in Aerospace engineering and holds a MSc and a BSc from University of Padova in Italy.