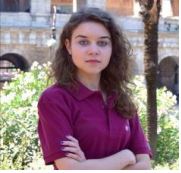 Veronica Bandini was born in Rome on the 14th of May 1996, and at the time of her application was studying aerospace engineering at “Sapienza” University of Rome.

On the academic year 2016/2017 she worked with the Sapienza Space Team. This is part of the Sapienza Aerospace Student Association, which is a student branch of the American Institution of Aeronautics and Astronautics (AIAA). She worked as Communication and Data Handling (CDH) responsible, Flight Software (FSW) design and took part at the CanSat Competition in Stephenville (Texas) as Ground Control at the Ground Station (GS).

She is currently involved into the TARDIS experiment as Team Leader and responsible of the Mechanical and Actuation Design. The experiment was selected for the REXUS/BEXUS Programme organized by SNSA, DLR and ESA. It will be launched from Esrange (Sweden) in late October 2019 and will fly on BEXUS 28.

Related to this topic, she published and presented the paper titled “Stratospheric Balloon attitude and position determination system based on the VHF Omnidirectional Range signal processing: TARDIS Experiment” at the conference Metrology for Aerospace in Turin in June 2019.

The attended BSc lectures at university were mostly related to Aeronautics, in particular to aeronautical engines and systems, with a deepening about composite materials in the aerospace field and fatigue.

The jury found in Veronica’s application a clear motivation to contribute to outreach and space education for young girls and boys alike. Her Professor at Sapienza University of Rome clearly underlines her interpersonal skills and her excellent project team leadership, including in Space hands-on student projects.

What also made Veronica’s profile stand out is her altruistic use of the grant, with which she plans to help her team mates in the REXUS-BEXUS Programme be part of the launch campaign at Esrange in Sweden next October.

«I want give my contribution to outreach and space education for young girls and boys. Moreover, I plan to use the grant to help my teammates in the REXUS-BEXUS Programme be part of the launch campaign at Esrange in Sweden next October »