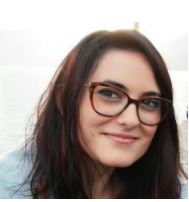 At the point of application, Aloisia is a final year of MSc in Space Engineering student at the Politecnico di Milano (Italy). Her career is focused on re-entry subsystems, in fact, she was the head of the Recovery System Department in the Skyward Experimental Rocketry association from 2013 to 2017.

After that experience, in which she improved management skills, she studied also techniques to have controlled re-entry systems, like guided parachutes with high performances. Thanks to that association and her team, she designed and realised a guided parawing which will be used in the next launch.

Due to her passion for the space field she is currently doing sensibilization campaigns to involve young people in STEM sectors: for this reason, she joined the Italian Core Team of Women in Aerospace with which actively participates to organise events and to promote association aim in the South of Italy and in Milan.

She joined SGAC in 2017 and became the Local Point of Contact for Milan and thanks to it she took part in the organising team for the Yuri’s Night 2018 and The First Italian Space Startup Competition held last 11-12th May.

The jury appreciated Aloisia’s proactive organization of a STEM awareness event in her home town, with a view to then bring it to other cities, as well as her work as a member of the WIA-E Italian Core Team.

To her merit goes also her co-authorship of a paper on Gender Equality in the European and Italian Space Sectors, presented at IAC 2018 in Bremen. The letter of support to Aloisia’s application from her professor at Politecnico di Milano was also very appreciated by the Jury as it confirmed her excellent academic record.

« I created a STEM awareness event in my home town in Apulia Region, with a view to then bring it to other cities. I believe that education can play a key role to inspire the next generation of engineers »