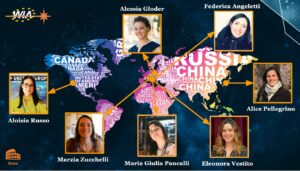 The Gender Equality Research Group of the Rome Local Group of Women In Aerospace-Europe (WIA-E Rome LG) aims to promote awareness on Gender Equality principles and to foster a fruitful collaboration among international aerospace associations sharing analogous goals. The cooperation with the Japanese association of women in aerospace (Sorajo) allowed to start a cross-cultural analysis in the Italian and Japanese Aerospace sectors to understand how different cultural environments could affect the individuals’ personal perception of Gender Equality. The results of this study have been presented during the CyberSpace Edition of the 71st International Astronautical Congress (IAC) in October 2020 [1].

The understanding of socio-cultural implications and biases is very important to detect what can limit the gender diversity in STEM fields in different countries. People process information from the surrounding social environment by mentally organizing them into groups based on common traits that are typically culturally determined, resulting in prejudices and stereotypes. Recognising the culture’s influence on Person Perception and if gender inequality impacts individuals’ choices are vital to design measures that can be both widely accepted within the Aerospace community and effective in trying to solve the Gender Inequality situation.

Different events and panel discussions were organized between December 2019 and May 2020, by inviting male and female representatives to share their opinions and experiences about Gender Equality in the Japanese and Italian Aerospace fields, respectively. All the outcomes of these events were contextualized in the socio-cultural environments of both countries, comparing similarities and differences among several aspects (education, social and cultural role of the family, working policies and laws promoted by Governments to address gender equality issues, as quotas). Consequently, the need to focus on how gender inequality can impact individuals’ person perception on their inclusion, the received treatment, possibilities and career were identified for further investigation.

For this purpose, the WIA-E Rome LG Gender Equality Research Group decided to prepare an online pilot survey, titled “Perception on Gender Inequality in the Aerospace Field” to be shared in Italy and Japan, particularly targeting professionals and students. The survey contained different questions, grouped by the above-mentioned main areas of investigation, defined in order to verify the identified Null Hypothesis: “Subjects believing that their gender creates obstacles for Inclusion/Treatment/Possibilities/Career did not perceived gender inequality in their field of study/work”. During the data analysis, the participants’ replies were correlated only with their gender to highlight the lack or presence of specific patterns, without differentiating between the Italian and Japanese situation due to the little number of participants from the Japanese Aerospace sector.

The survey’s participants (students and professionals) stated that they usually feel included in their studying or working environment, especially when referring to their social and professional network. However, the majority of women experienced different treatment, very often correlated to their gender, in their studying or working environment. Furthermore, most of respondents reported several obstacles for their possibilities and career while studying or working in the Aerospace sector related to their gender, even if the Aerospace sector seems to offer the same career opportunities to everyone, despite gender. This result could be interpreted as an indicator of a predominant perception of the Aerospace field as an intrinsically diverse and open environment, even though historically male-dominated, also because of its international and cooperative nature.

Actions at both social and cultural level are necessary to counteract negative stereotypes and bias related to gender because everyone should feel comfortable and integrated in their studying or working environment. Moreover, the pilot survey allowed to identify four problematic areas where specific measures are required: the need of a more inclusive and diverse (thus creative and productive) studying and working environment, equal opportunities in terms of Inclusion, Treatment, Possibilities and Career granted to each individual, and the need of increase the efforts required to ensure that gender is no longer perceived as a discriminatory factor.