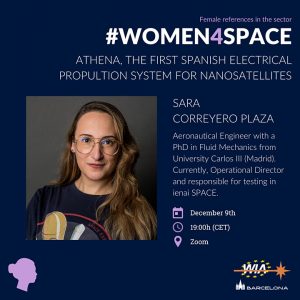 Join WIA-E Barcelona on 9th of December from 19:00-20:00 CET for the talk: “ATHENA, the first spanish electrical propulsion system for nanosatellites” by Sara Correyero.

Ienai SPACE has been developing the propulsion system ATHENA, a micro electrical propulsion rocket based on micro and nano technology that allows nanosatellites to change their orbit, to stay longer in the same orbit or even to avoid possible collisions. The development of the main component of the first ATHENA prototype was in collaboration with Centro Nacional de Microelectrónica del SCIS, in Barcelona. It will be launched January, 2022.

During this #Women4Space conference, the process to develop ATHENA and what is expected from this first mission will be explained by Sara Correyero.

Sara Correyero, is an Aeronautical Engineer and has a PhD in Fluid Mechanics from the University Carlos III de Madrid. She received two awards during her PhD thesis, one for the best article and the second one for the best visionary idea. She is the Operational Director and responsible for testing in ienai SPACE.