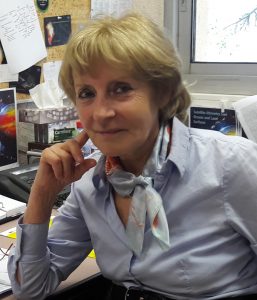 Anny Cazenave, >>recipient of the WIA-Europe Outstanding Achievement Award 2021 shares her thoughts on her personal pathway into the space sector and how we can increase the number of women in leadership positions.

WIA-E: Tell us a bit about why you chose a career in aerospace, and how you got into your field of specialisation? Did you have any turns in you career path that you had not anticipated?

A.C.: During my university studies, I wanted to be an astronomer.  However, the chances of life have made that instead of looking upward at the sky, I looked downward at the Earth; I never regretted. After a PhD on the rotation of the Earth, I was recruited by CNES, the French Space Center, during the 70s. At that time space agencies wanted to quantify the forces acting on artificial satellites in order to precisely compute their orbits. Thus, I started to work on the determination of the Earth gravity field using different space geodesy techniques. But just measuring the Earth gravity field was not enough for me and I started to work at understanding the origin of the gravity field anomalies in terms of internal structure of the Earth, in particular mantle convection. Later on, the growing performances of space geodesy techniques offered me the opportunity to study other solid Earth processes, like large-scale tectonic deformations, vertical crustal motions, motion of the Earth center of mass, highs and lows of the mean sea surface and their link with the sea floor topography, etc. In the early 1990s, the launch of the first high precision altimetry mission Topex/Poseidon, developed jointly by NASA and CNES opened the era of “Oceanography from space”. I decided to move to this new research field and worked at measuring sea level rise and understanding its causes. I also used altimetry and other space techniques to  study land hydrology and the global water cycle. Over the last 20 years, my research has been mostly devoted to climate and environmental science using satellites. Moving to such different fields was challenging, considering the huge amount of new things that need to be learned each time. But on the other hand, this was highly motivating and definitely a very rich experience.

WIA-E: Inviting young women to follow a career in aerospace, what would you highlight in your particular field of expertise?

A.C.: Earth sciences is an exciting research field, truly interdisciplinary. Understanding how the complex Earth system works and evolve means investigating how its different components interact together on a broad range of spatial and temporal scales, and how these impact human life. The role of space has increased over the last few decades and satellites are now unavoidable tools for both fundamental science and societal applications. This global vision offered by space observations is to me one of the most attracting aspects of this discipline.

WIA-E: Over the recent years, do you see an improvement for women entering and pursuing a career in STEM? In your daily work, do you often have a chance to actively support other women in your field?

A.C.: It is well known that women in research and engineering are under-represented (only 41% in the EU whole Higher Education sector, and much less in the fields of science and engineering, including geosciences), in spite of an almost gender balance at the PhD level. It is also well known that the evolution of women career in research remains characterized by strong vertical segregation. How can we help the younger generation of women in their scientific career path? Although there are no well identified strategy, some concrete actions appear easy to implement. This can start by educating and supporting female PhD students and post-docs, at the research lab level, conveying basic messages such as work with passion, pursuit excellence and develop self-confidence. Encouragements and help junior scientists to apply for research grants are also easy to perform. Share your own scientific networks with early-career women scientists and help them to participate as much as possible to international meetings and conferences is a way for gaining scientific visibiliy and self-confidence. Other actions like helping women to be involved in scientific policy committees, in panels that distribute grants and recruit candidates would contribute to increase the gender balance in a number of areas of influence. Nominations of women scientists for national and international prizes and awards should also be more systematically undertaken. Mentoring programmes at the national level as well scientific networking look very important for the younger generation, but these remain not enough developed. Finally, cultural barriers are the most difficult to overcome. And this starts at the level of childhood education, fighting against gender bias and stereotypes. It is important to develop science education early at school level through experimentation. This now exists in many countries, in particular in the EU.  Explain to girls that science is not just for boys. Girls and boys have similar intellectual abilities. It is also very important that women scientists participate in scientists-schoolchildren meetings to exchanges about science questions. Personally, I do that several times a year in colleges and high-schools, and this is highly rewarding.

WIA-E: What measures do you think are most effective for increasing the opportunities for women to grow into leadership positions?

A.C.: Although the presence of women in sciences has been increasing in the past few decades in Europe, it remains incredibly low at the top levels. Recent statistics from the European Commission indicate that now women represent 50% of first degree students in many countries. However, the proportion of women at each stage of the scientific career decreases almost linearly, reaching less than 10% at the highest-level jobs. Causes have been the object of many studies and are clearly multi factorial. From my own experience, I don’t think that this results from sexism nor discrimination. Rather, I think that this is a result of complex cultural factors making women subconsciously persuaded that top level jobs are destined to male scientists only. Many women scientists drop the idea of playing a role at high-level research, considering it as a way of exerting power (a matter reserved to men). Others give up the possibility of combining childcare and high-level commitments in research. And too many women still find just natural to sacrifice their own scientific ambitions to the benefit of their family. Personally, I chose to prioritize scientific productivity and expertise versus hierarchical responsibilities. Besides I tried to keep a satisfactory balance between family demand and research involvement. This was indeed facilitated by the French system, which provides substantial support to women’s work (nurseries, recreation centers during school holidays, etc.). To my point of view, the most promising way of increasing the number of women at top levels in research is through education and mentality evolution.

WIA-E: In your career, have you had an important mentor or network of close colleagues that helped you achieve your goals?

A.C.: I worked with a lot of students and scientific colleagues worldwide during my career. Owing to their scientific leadership, several of them have had inspiring and stimulating influence on my research. But overall, human relationships remain a fundamental component of scientific research. It is a collective adventure and this is certainly what I appreciated the most.

WIA-E: Do you have an achievement you are most proud of?

A.C.: Probably what I am the most proud of is to have shared my passion for science with the 27  students that I have supervised during their PhD thesis, and with the many post-docs I worked with all along my career.

WIA-E: If you could give your younger self one bit of advice, what would it be?

A.C.: Not an easy question. I never found that being a woman in science (and in aerospace) was a handicap. Excellence in research, curiosity and passion should always remain the main goals to pursue, whether you are a man or a woman. My only regret is to not have had enough time to become an expert in other science domains of interest to me (e.g., in astrophysics…).

Anny Cazenave is emeritus scientist at the Centre National d’Etudes Spatiales in France, and up to recently director for Earth sciences at the International Space Science Institute in Switzerland. Her research deals with the applications of space techniques to Earth sciences. In the first part of her career, she used space techniques to study geodetic problems (Earth rotation, gravity field, global Earth deformations) and marine geophysics. About two decades ago, she moved to climate research with focus in hydrology and sea level.

She contributed to this domain in using satellites to observe changes in land hydrology and sea level rise from global to local scales. She also contributed to the understanding of the processes (e.g., ocean warming, land ice melt, terrestrial water storage changes) causing global and regional sea level rise. Her current work also concerns sea level rise in the world coastal zones and the associated impacts. She was a lead author of the 4th and 5th Assessment Reports of the Intergovernmental Panel on Climate Change. She was awarded the 2020 Vetlesen prize.