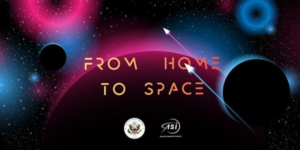 Please join us for this week’s online event, sponsored by the Italian US Embassy in collaboration with ASI, a WIA-E Corporate Gold Member. This event will be held in English.

Twice a week, the USA Mission in Italy and the Italian Space Agency (ASI) will narrate Space and human’s exploration in Space.

You’ll have the opportunity to ask questions to the host, who will reply live.

Launched in 1998 and involving the United States, Russia, Canada, Japan, and the participating countries of the European Space Agency, the International Space Station (ISS) is one of the most ambitious international collaborations ever attempted. The largest space station ever constructed, astronauts from 18 countries have visited it. An international crew of six people live and work while traveling at a speed of five miles per second, orbiting Earth about every 90 minutes. In 24 hours, the space station makes 16 orbits of Earth, traveling through 16 sunrises and sunsets.

Mr. Scimemi is the Director for International Space Station (ISS) at NASA Headquarters within the Human Exploration and Operations Mission Directorate. His duties consist of ensuring safe and productive onboard operations and utilization and implementing policy and programmatic direction. He regularly engages with the White House and Congress, as well as international space agency leaders around the world regarding human spaceflight issues. He has been instrumental in the development of NASA’s plans for human exploration beyond LEO and for the development of a commercial market in LEO. In addition, Mr. Scimemi is the NASA liaison to the ISS National Laboratory implementing organization, the Center for the Advancement of Science In Space (CASIS).

Mr. Scimemi has been a leader in human spaceflight for 30 years. He started his career at the Johnson Space Center in the Shuttle program 2 months prior to the Challenger accident. He has worked as a civil servant and in private industry. He has been employed at four NASA centers: Johnson Space Center, Ames Research Center, Goddard Space Flight Center, and Headquarters. His experience spans human spaceflight, Earth and space science including programs such as Space Shuttle, Hubble, Space Station, SOFIA, NPP and many others. Most of his technical career has been spent in flight software and avionics development, testing and operations as well spacecraft level integration. He has been at NASA Headquarters since 2003.

He earned a Bachelor of Science degree in Mechanical Engineering from McNeese State University in 1984 and is a native of Louisiana.