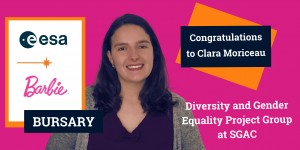 The winner of the >>WIA-Europe Outreach Award: ESA x Barbie Bursary is Clara Moriceau. She will use the €5000 bursary within the PADAWANS project, which she leads as member of the SGAC Diversity and Gender Equality Project Group.

The main objective of the >>PADAWANS project is to organise a series of events for school children across Europe highlighting the diversity of activities and profiles in the space sector. The projects aims to involve teachers and parents, to encourage the interest in space-related professions in girls and boys alike, and to break gender stereotypes by presenting the children with female role models.

Clara is a member of the Space Generation Advisory Council (SGAC), in which she is involved as the leader of the PADAWANS team, one of the long-term activities of the Diversity and Gender Equality Project Group. Clara joined SGAC in 2019, where she was part of >>SG[France]2020 organizing team, a local event in France about gender equality in space.

Clara is a project engineer working at MEDES, the Institute of Space Medicine and Physiology, in Toulouse, France. She is working on various innovative projects related to health and space. Prior to joining MEDES, Clara has been studying applied mathematics engineering at INSA Rouen Normandie and space systems engineering at ISAE-SUPAERO.

The >>Space Generation Advisory Councilin Support of the United Nations Programme on Space Applications (SGAC) is a global non-governmental, non-profit organization and network which aims to represent university students and young space professionals ages 18-35 to the United Nations, space agencies, industry, and academia. SGAC’s purpose is to create a global network in the space sector for students and young professionals, connect them to peers and top space professionals from various organizations and give the next generation of space sector leadership opportunities and a voice in global space policy. Founded in 1999 and headquartered in Vienna, Austria, the SGAC network of members, volunteers and alumni has grown to more than 16,000 members representing more than 165 countries.

Each Project Group is dedicated to a distinct space-related topic and serves as a platform within which the young space community can share their opinion, provide concrete recommendations and implement new projects on current issues.

SGAC has 11 topical focus-groups called Project Groups, including one about >>Diversity and Gender Equality. Its main objectives consist in inspiring, promoting and engaging for a more diverse, gender-balanced and inclusive space sector. The >>PADAWANS activity is one of the long-term activities of this project group and is dedicated to the organization of events and hands-on activities dedicated to children to break stereotypes and raise awareness on the topic of gender equality and diversity.

The PADAWANS team is composed of three sub-teams and a coordinator:

About the ESA x Barbie Bursary

In 2021, Barbie partnered with the European Space Agency (ESA) and its female astronaut Samantha Cristoforetti to celebrate ‘Women in Space’ and inspire girls everywhere to see the STEM field as a viable career option. The collaboration sees Samantha’s doll sent on a Zero-G flight and educational resources on space made available to parents and teachers. Part of the proceeds from sales of the Samantha Cristoforetti Barbie doll, previously a one-of-a-kind Barbie but now available across Europe, has been donated to Women In Aerospace to inspire the next generation. WIA-Europe has used the donation to create an Women In Aerospace Europe Outreach Award: ESA x Barbie bursary that would support a European outreach project conducted by a young aerospace professional.

The Barbie/ESA partnership was forged after research in the UK conducted in 2019* showed four out of ten parents believed they may be holding their daughter back from entering or learning about this type of career, due to their own lack of wisdom in this area. A third did not believe there are enough positive role models in space and STEM-related fields for girls, and 70 per cent agreed that achievements of females in space needed to be given more of an equal footing to those of their male counterparts.