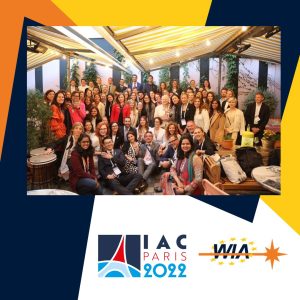 It was a great pleasure to see so many of our long-standing and new WIA-Europe members connect during the 73rd International Astronautical Congress in Paris. Throughout the week, which included a wide range of formal and informal WIA-Europe gatherings, the atmosphere was truly cordial and the exchanges inspirational.

We would like to thank Simonetta Di Pippo, Elena Feichtinger, Pascale Ehrenfreund, Kai-Uwe Schrogl, Anny Cazenave, Rodrigo da Costa, Anna Rathsman, Elodie Viau as well as WIA-Europe President Luisella Giulicchi and WIA-Europe Chair of the Board Christina Giannopapa for taking the time to meet and exchange with our members and supporters in a series of Meet & Greet sessions at the WIA-Europe booth.

In informal conversations, our invited speakers shared the skills they considered the most valuable for their personal and professional development. The core values they listed were committment, persistence, and patience; curiosity and continuous learning; but above all honesty and authenticity in all your endeavours. “Trickery might appeal to you as a short-term solutions in certain situations, but be sure that in the long run it will always fail you,” remarked Kai-Uwe Schrogl.

And Pascale Ehrenfreund pointed out that while today many opportunities are given for a multifaceted education, the younger generations should try not to get destracted and focus on building solid expertise in an area of their choice first. “You can still make career jumps at a later point in life,” she said, “but first establish a solid knowledge and competence in one field.” A fundament you will always be able to stand on no matter where your career and your curiosity will take you later.

During the IAC Diversity Day on 20th September, WIA-Europe Working Groups>> presented their findings during a panel discussion hosted by the International Space Education Board>>.

The points raised during the discussion and the following Q&A included:

Other events of the week included the Launch of the WIA-Europe Start Up Programme, the presentation of the research conducted by WIA-Europe Rome on Person perception of gender-related inequalities in the Italian and Japanese Aerospace Sectors>> as well as the WIA-Europe Cocktail reception with more than 100 members of the network present!

It was fantastic to see that all our events engaged a gender-diverse audience and that the WIA-Europe booth received visitors from all genders and career stages expressing their support and committment to a diverse and sustainable aerospace sector.